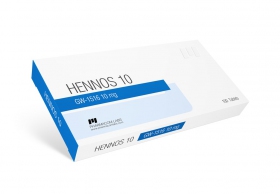 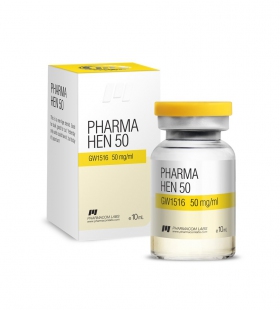 • INFORMATION:
GW1516 (also known as Cardarine/Endurobol) is not a steroid; it is a selective agonist of peroxisome proliferator-activator receptors (PPARs). It was originally developed for the treatment of obesity, diabetes mellitus, dyslipidemia, and cardiovascular diseases.

GW1516 has a wide variety of effects in the body such as cell energy processes, insulin production, fatty acid oxidation, and even has a positive impact on muscle inﬂammation.

In studies GW1516 has shown muscular protective and enhancing effects and this seems to be related to a decrease in muscle inﬂammation and damage. GW1516 has been shown to elicit cardiovascular protection possibly due to its actions in decreasing insulin spikes and stabilizing cholesterol levels as found in research. It is notable, that GW1516 not only decreases very-low-density lipoproteins (VLDL), but also increases high-density lipoproteins (HDL), which is the result of increased expression of the cholesterol transporter ABCA1, caused by GW1516.

From the very beginning GW-1516 was accompanied by defamatory information. The World Anti-Doping Agency (WADA) put it into the list of hazardous to health drugs, justifying this action by the statement that the drug may allegedly contribute to carcinogenesis. According to research from GlaxoSmithKline, the drug caused cancer in rats. In these studies subjected rats were administrated unphysiologic dosages of 10 mg/kg of body weight. Let`s draw an analogy with a human: for a 200lb (roughly 90 kg) man such a dose would be equal to 900 mg per day. These dosages defy any common sense; moreover, it can`t be compared with the standard dose of 20 mg per day for this compound. 900 mg/day of GW1516 is comparable to taking 14625 mg of aspirin per day (while its standard single dose does not exceed 325 mg). Forget cancer, this dosage of aspirin could literally KILL you!

There are two main uses of GW1516 is sport. First, to increase endurance. The test results showed a 68% endurance increase in rats while running on a treadmill when taking GW1516. A common dose of 10 mg/day will ensure a substantial enhancement in endurance. When used in bodybuilding GW1516 can signiﬁcantly reduce rest time between sets.

The second reason to use GW1516 is fat burning. The drug has shown the ability to burn fat, while still being non-catabolic, this means it helps burn fat and keep muscles.

In fact, GW1516 has not shown any signiﬁcant side effects. There is no hormones suppression, no toxicity and no other common side effects. The only thing that should be noted is that GW1516 signiﬁcantly activates metabolism and contributes to the rapid consumption of glycogen during exercises, so do not exceed recommended dosages otherwise signs of hypoglycemia (weakness, drowsiness, hunger, muscular cramps, in severe cases - loss of consciousness) may occur. If you feel some of these signs, immediately eat something sweet (containing fast carbs).


• Summary and overview of this compound and it's effects
(I know some may not like this speaker; however, he has a lot of good info collected and the presentation here about this compound is of value regardless):
https://youtu.be/nMh51xK5oEg


• The facts about health considerations and studies:
https://youtu.be/TIOSUVdkYCA


PHARMA HEN 50 (GW1516)
PHARMA HEN 50 is not a steroid - it is a selective agonist of peroxisome proliferator-activator receptors (PPARs). GW1516 has a wide variety of effects in the body such as cell energy processes, insulin production, fatty acid oxidation, and even has a positive impact on muscle inﬂammation.

Two main uses of GW1516 in sport are increased endurance and fat burning. The drug has shown the ability to burn fat, while still being non-catabolic, which means it will allow you to burn fat and maintain muscle simultaneously.
Last edited: Feb 25, 2021
You must log in or register to reply here.
Share:
Facebook Twitter Reddit Pinterest Tumblr WhatsApp Share
Top