The more vitamin D there is in cancer patients' blood, the greater their chance of surviving the disease. Norwegian researchers discovered this when they analysed data on 658 cancer patients. 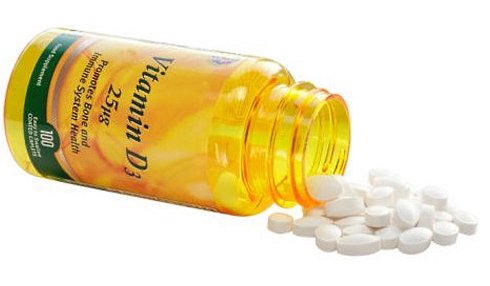 Another theory, which certainly doesn't exclude the other, is that a high level of vitamin D activates the immune system and thus increases the chance that immune cells destroy cancer cells before they become dangerous.

Study
The study, which Norwegian researchers at the Institute of Population-based Cancer Research published in 2012 in Cancer Causes & Control, looked at people with breast cancer, colon cancer, lung cancer and lymphoma. All patients had blood samples taken within 90 days of their diagnosis.

The researchers measured the concentration of vitamin D in the blood, and on the basis of this divided the patients into four equal groups. These groups are called quartiles.

The figure above shows the survival curves for patients with breast cancer and lung cancer.

Conclusion
"These findings add to a growing body of literature, indicating that serum levels of vitamin D are positively associated with cancer survival", the Norwegians conclude. "Intervention studies of vitamin D administration among cancer patients will be required to determine whether these observations are causal."

Thanks to the fact that medicine does not stand still, every patient has a chance to cope with the disease. This article Gut Health and Brain Fog will help you learn more about how the body works and how to keep it healthy. For example, the more vitamin D in the blood of cancer patients, the better their chances of surviving the disease. It is important to have regular check-ups and consult your doctor to have a better chance of living a healthy life. Take care of yourself!
L

Normal levels of vitamins and micronutrients improve people's lives. The deficiency of one element provokes the development of diseases, which leads to bad consequences. Generally, people should get all the necessary elements from their food. Today it isn't easy to find food rich in vitamins and trace elements. Often, men suffer from low testosterone levels, leading to malaise, fatigue, sleep disorders, and problems with sexuality. To prevent the development of such serious problems, you can order testosterone supplements at https://www.healthcanal.com/sexual-health/264885-testogen-reviews.html.
You must log in or register to reply here.
Share:
Facebook Twitter Reddit Pinterest Tumblr WhatsApp Share
Top