So the end of the world is tomorrow

what's this guy's excuse for the world not ending?

Little Wing said:
what's this guy's excuse for the world not ending?
Click to expand...

I think end will come either from our own greed or another big bang. If it is former then it will take a long time. If is later then we never know when it is going to happen. I do believe that it will end but I just don't know how or when it will end.
J

I am immortal, so the apocolypse doesnt affect me.

Man with a plan

The end of the world is upon us. To some people it ends faster than
to other but it ends.

Who wants to live forever?

Long as I'm living my good life is all that matters to me.
And I don't see that good life ending anytime soon.

Well, it appears that the end is not near, despite an apocalyptic prophecy from an American preacher who stated that the Rapture would occur on Saturday at 6 p.m.

But as the time of reckoning came and went in time zones across Asia and Europe, nothing much happened.

Many people on Facebook and Twitter could only ask: is this the way the world ends? Not with a bang, but a whimper?

Indeed, if the apocalypse was actually occurring on Saturday, it sure didn't unfold the way that Harold Camping, an 89-year-old retired engineer-turned-oracle, said it would.

Camping, who also wrongly predicted the Rapture back in the 1990s, said there would be earthquakes so powerful they would break open graveyards and send Christian souls back to heaven.

There would be chaos, gnashing of teeth and sorrow for the non-believers.

In fact, the prophecy predicted that Jesus Christ would return to Earth at 6 p.m., but there was nary a sight of the Heavenly visitor in earth's eastern time zones.

Should we call whatever happens on Saturday as the Apoca-lapse? The Apoca-limp?

Still, the followers of Camping's ministry, called Family Radio Worldwide, were still likely holding out hope as the countdown continued in North America.

According to Family Radio's website, Camping discovered a mathematical formula from the text of the Bible that allowed him to pinpoint Judgment Day.

The last time Camping made such a prediction was in 1994, although things didn't quite go as he had expected.

However, Family Radio's website maintains that "the accurate timeline of history was revealed to true believers" only a few years ago.

"On May 21, 2011 two events will occur," the group predicts. "A great earthquake (that) will be so powerful it will throw open all graves. The remains of all the believers who have ever lived will be instantly transformed into glorified spiritual bodies to be forever with God.

"On the other hand the bodies of all unsaved people will be thrown out upon the ground to be shamed. The inhabitants who survive this terrible earthquake will exist in a world of horror and chaos beyond description."

In an interview with The Associated Press last month, Camping said that there was "no possibility that it will not happen," and blamed his 1994 snafu on a mathematical error.

Family Radio has mounted an extensive campaign to share its discovery in North America and overseas. Billboards have sprung up from Colorado to Dubai proclaiming that May 21 will bring the end of the world.

The ministry has also organized missions to Iraq and Turkey, where volunteers are asked to use their final days on Earth handing out leaflets. RV caravans are also spreading the word across North America -- including one that will end its journey in Vancouver on Saturday.

Jokes prosper in time of prophecy

But the sensation has also provided fertile ground for jokes from those who don't buy the fringe group's belief.

Jon Stewart took aim at the radio preacher Wednesday night on "The Daily Show," saying that "actuarially speaking he's probably not that far off," given Camping's advanced age.

On Facebook, there's now a "Post rapture looting" page that invites people "to pick up some sweet stereo equipment and maybe some new furniture for the mansion we're going to squat in" once everyone is gone and God's not looking."

The comic strip "Doonesbury" has also poked fun at the prophecy, and countless "Rapture parties" have been scheduled to celebrate what organizers believe will be the continuation of life as we know it.

Robalo said:
The end of the world is upon us. To some people it ends faster than
to other but it ends.
Who wants to live forever?

Everybody will live forever untill they die.

Ummmm... WE'RE NOT DEAD? It was supposed to happen already, unless God is on Cali time - there's too many homos out that way, so I doubt it.

We live again for the next armegeddon prediction! Fuck Ya!

Please, that bastard is a Jew through and through....

phosphor said:
Ummmm... WE'RE NOT DEAD? It was supposed to happen already, unless God is on Cali time - there's too many homos out that way, so I doubt it.

We live again for the next armegeddon prediction! Fuck Ya!
Click to expand...

Well, I got up and had bacon and pancakes for breakfast, just in case it was my last meal. I figured, might as well be tasty! I made the pancakes with bacon grease and butter, topped with maple syrup.

The earth did not shake.

I proceeded to go to my regularly-scheduled, rapture-be-damned diving lesson (off a board, not scuba), where I proceeded to do my first-ever back dive off the 3 metre board.

The earth continued to not shake.

I came home, did laundry, rubbed one out (again, just in case)... still no sign of the end, so I ate lunch. Chicken and wild rice with ratatouille, very tasty. Cottage cheese with strawberries and avocado. Cats are curled up around me (the had their "hey, it may be your last meal, too" whitefish and tuna "Fancy Feast" and are now sleeping off the load.).

I'm on the west coast, it's not six PM yet, so I may just smoke one and wait for the inevitable, which will either be "life as usual" or "the end of days". In either case, hubby's hopped up on Viagra, the fridge is well-stocked with Häagen-Dazs and I'm looking to score some black-tar heroin. Yanno, just in case.

What I don't understand is why this guys stupid prediction made the news. How is this egotistical self proclaimed profit any different from a homeless man with a "the end is near" sign?
M

Amazing how many people got caught up in this nonsense. It was supposed to happen awhile ago, maybe god is running late...
R

Well shit! Now I feel guilty because I ate a large pizza, thinking it was my last meal.

Bitch was good though

come at me satan

I spent the possible end of the world fucking with people. I setup a small stand offering free Kool-aid.

For some reason no one took any.

MDR said:
Amazing how many people got caught up in this nonsense. It was supposed to happen awhile ago, maybe god is running late...
Click to expand...

The reason the rapture didn't happen.

Poor saps. This is the only rapture that'll matter in our lifetime...

unfortunately many still haven't caught on to the tactics used by the gov they use those with faith. they have also lead people to believe that there is only one way to live via the "fictitious free markets" and the US brand of "capitalism"....

Not enough bodies hit the floor...

This is why it did NOT happen... 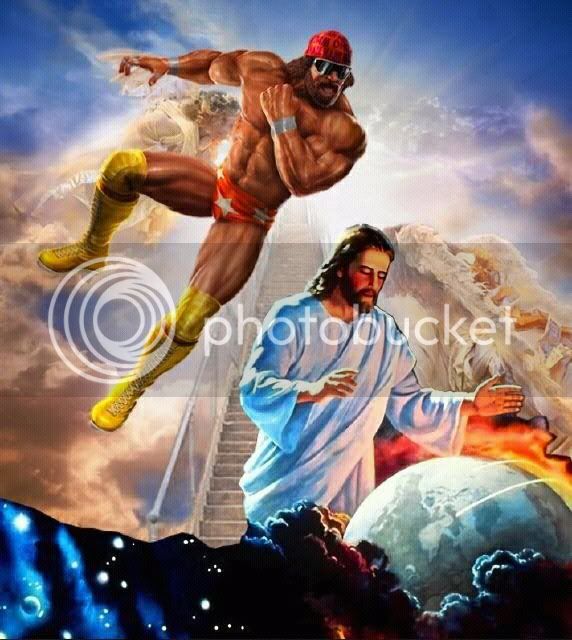 vortrit said:
This is why it did NOT happen...

He died for us

djlance said:
He died for us

Randy Savage did not die for us...
R

djlance said:
He died for us