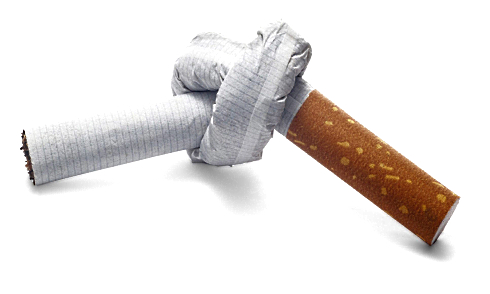 Exercise & smoking
There are a few studies that suggest that physical exercise makes giving up smoking easier. The withdrawal symptoms, the craving, low moods and weight gain are all less if ex-smokers exercise.

So you'd expect that the form of exercise that demands the most of the body - strength training - is even more useful for ex-smokers than other forms of exercise. But no scientific research on the matter had been done. Not until Joseph Ciccolo of Alpert Medical School at Brown University looked into it.

Study
Ciccolo did a study, a small one, and published it in Nicotine & Tobacco Research. It's a pilot study. Ciccolo got 25 smokers aged between 18 and 65 to stop, gave them counselling and nicotine patches - and got half of them to do strength training twice a week.

Each session consisted of a full body workout of 10 exercises. Initially the subjects did just one set of 10 reps of each exercise, but increased this to two sets after three weeks. The subjects increased the amount of weight they lifted when they could perform more than 10 reps per set.

After six months 16 percent of the subjects who had done strength training had still not touched a cigarette. In the control group the figure was half that.

The strength training also prevented the subjects from putting on weight. At the end of the three months the ex-smokers had actually lost half a kg of fat mass.

Conclusion
"Cigarette smoking kills more than a thousand Americans every day, and while the large majority of smokers want to quit, less than five percent are able to do it without help", says Ciccolo in a press release. [sciencedaily.com]

"We need any new tools that can help smokers successfully quit and it appears resistance training could potentially be an effective strategy."

"Adequately powered trials of resistance training for smoking cessation, including comparisons to other types of physical activity (e.g. aerobic exercise) and cost-effectiveness analyses are now required", writes Ciccolo in his article.

The study was funded by the American National Cancer Institute.